The world is full of haters. People who want to bring you down, or make you feel small. Some are just naïve. Some are trolls. And most thrive on social media. But bring that hate to @adidas and you’ll get taught a lesson. And it’s my job to help teach that lesson.

As the Social Media and Community Manager for the global @adidas Brand channels, I see it all – from the aforementioned haters to long-devoted brand advocates, and everything in between.

“No one interaction with a fan is ever the same, but I’ve found that following a few simple guidelines in the face of hatred can help steer any conversation into something more positive.”

Haters inspire creators. They push our brand and fuel our athletes. Responding to them can be tricky, but I’ve found that it’s always best to take the high road. Reply with something defensive or equally mean-spirited and you’re no better than them. Stoop to their level, and they’ve won.

On Valentine’s Day, we shared an image of two women on Instagram – one stepping higher than the other to suggest an off-camera kiss. This image, along with the caption, was intended to spread a message of love while supporting our brand’s strong-footed stance on equality.

“As the comments came flooding in, I immediately recognized the divisiveness of the reactions. But it was the genuinely hateful responses that pushed me to take action.”

Simply deleting the nasty comments or blocking their authors wasn’t enough, and I have no problem admitting how difficult it was to bite my tongue. But remembering to stay positive and take the high road, the idea to reply with a wave and a kiss goodbye felt like the obvious response.

“With two simple emojis and responses focused on love, we showed that we don’t tolerate that level of hatred – and we don’t mind speaking up to say so.”

Not only did this get our point across, but it became our most successful post in adidas history.

In case you’re unfamiliar, online trolls are individuals who deliberately start arguments or attempt to upset people by stating extreme opinions or asking obvious, negative or off-topic questions – typically for their own amusement. In many ways, these are the bullies of the Internet, and they live to get a rise out of people. The best defense against them? Ignore them. If what they’re saying is extreme in its vulgarity, don’t be afraid to block and/or report them. Just like the haters, it’s important not to stoop to their level.

In some cases, however, responding to trolls can be extremely fun – and highly effective. For example, a fan recently asked @adidas on Twitter, “Need dating tips, @adidas. Shall I drop her, if she says Ronaldo > Messi?”. As widely known and long-time supporters of Messi, it’s very likely that this person was “trolling” @adidas – asking a mostly obvious question in an attempt to elicit a response. In these moments, cooler heads prevail.

It would be easy to say “Duh. Drop her”. It would be even easier to ignore the question altogether. But keep things playful and the trolls don’t stand a chance. 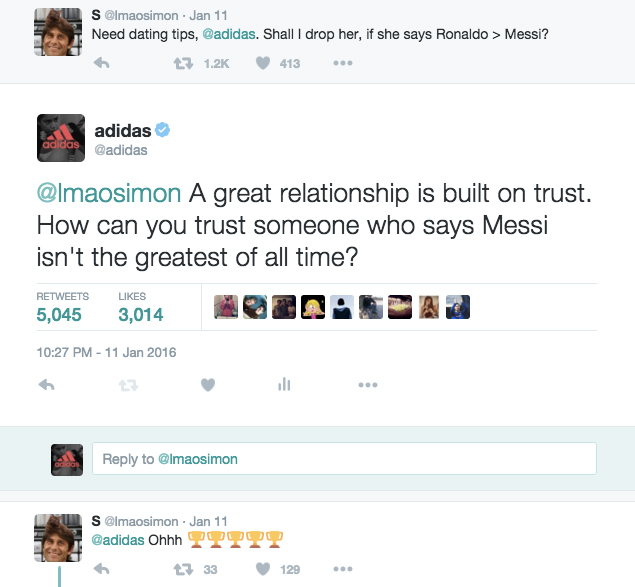 Brand advocates: give the love right back

One of the best parts of my job is seeing how people reach out to show us love. Whether they’re sharing excitement over copping a pair of the highly-coveted Yeezy’s, asking about a shoe or product they’ve seen that they MUST have or simply had a great customer experience at one of our retail stores, the love pours in by the minute. Our fans don’t have to share their love, but many make an effort to do so. For that reason alone, we should show that effort back, and then some.

“The more personal we can make the reply, the better. If their real name is provided in their profile, we’ll use it. If they’ve provided some additional info in their bio, we try to incorporate it in a playful way. “ 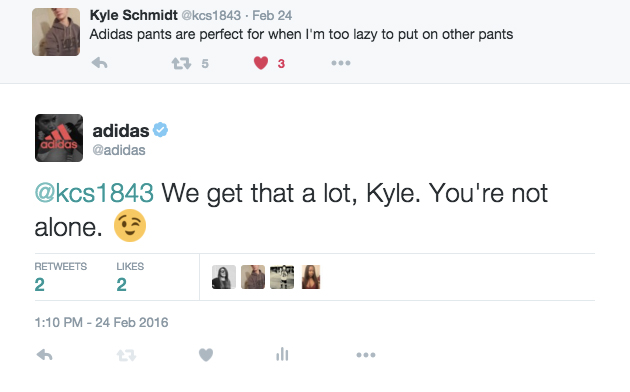 And if they respond to our response, we love to keep the conversation going. No reply is the same. Nothing is automated. It’s simple – you show us love, and we’ll show it right back.

“Whether you’re dealing with haters or lovers, it’s always a good look to stay positive and keep things light.”

If you find yourself over-thinking it, move on to another reply and come back later with a fresh pair of eyes. Keep your brand guidelines close, but when push comes to shove, it’s best to go with your gut. Welcome the haters. Let them fuel you. Because above all, we’re #heretocreate love.

What’s your experience with social media community management? How do you deal with the lovers and the haters?

Try again
by Shani Kaufmann 03.03.2016
Great entry John. Best adidas Group blog I have read to date.
Reply
by denisebella@hotmail.com 07.03.2016
Thank you adidas for the LGBT support!
Reply
by Lacy 07.03.2016
I LOVED this! It made me even more proud to work for this brand... I posted it all over the place, great job team. LOVE IS LOVE!
Reply
by Varsha Jayaraj 21.06.2016
The best way to give back to someone is polished sarcasm! Great post. Love how you talk about maintaining your cool and not stooping to their level.
Reply