Recently visited articles
Ocean, Climate and Life – If you get the chance to shape the future, jump on it
9
SIGN UP
NEXT ARTICLE

I like planning. I really do. But sometimes you cannot plan it all, and life itself can at some point offer you moments that go well beyond your wildest dreams. I want to share a very special experience with you: What it feels like when the world is watching and our company showcases the future of sustainability and product innovation.

Since joining the adidas Group back in 2012 I have learned that every day might bring new challenges and opportunities. It has been a sequence of incredible experiences, flowing into the moment when the adidas Group announced its partnership with Parley for the Oceans. 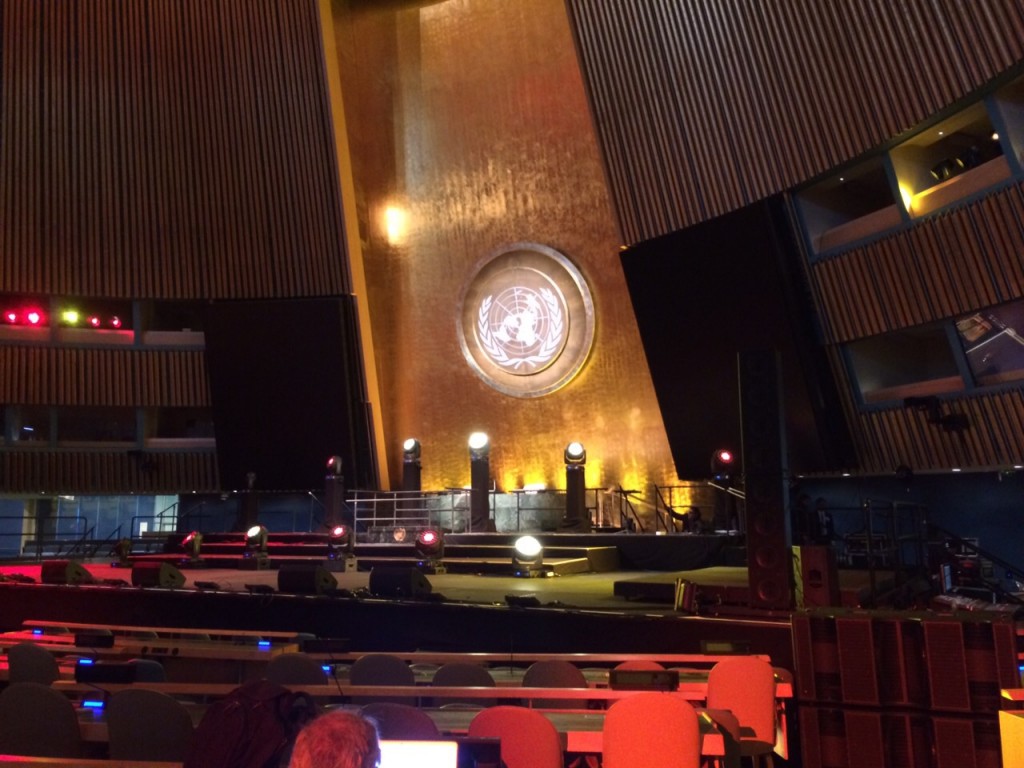 In case you missed it: Parley for the Oceans is an organisation in which creators, thinkers and leaders come together to raise awareness about the state of the oceans and to collaborate on projects that can protect and conserve them. As founding member, adidas supports Parley for the Oceans in its education and communication efforts, and its Ocean Plastic Program that intends to end plastic pollution of the oceans.

And what happened only two months after we announced our partnership with Parley for the Oceans? Well, something pretty much unique. adidas was invited to speak at a “Parley Talks” on the occasion of an climate change event on 29 June 2015 in New York, convened by the United Nations President of the General Assembly.

“We didn’t waste a second and immediately put together a team that could really take this experience to the next level, and turn it into a success.” Silvia Raccagni, Senior Manager Sustainability Communication

We were literally working against the clock. But it didn’t matter. Each of us immediately realised how important this project was, for the brand, for our employees, and for the oceans! 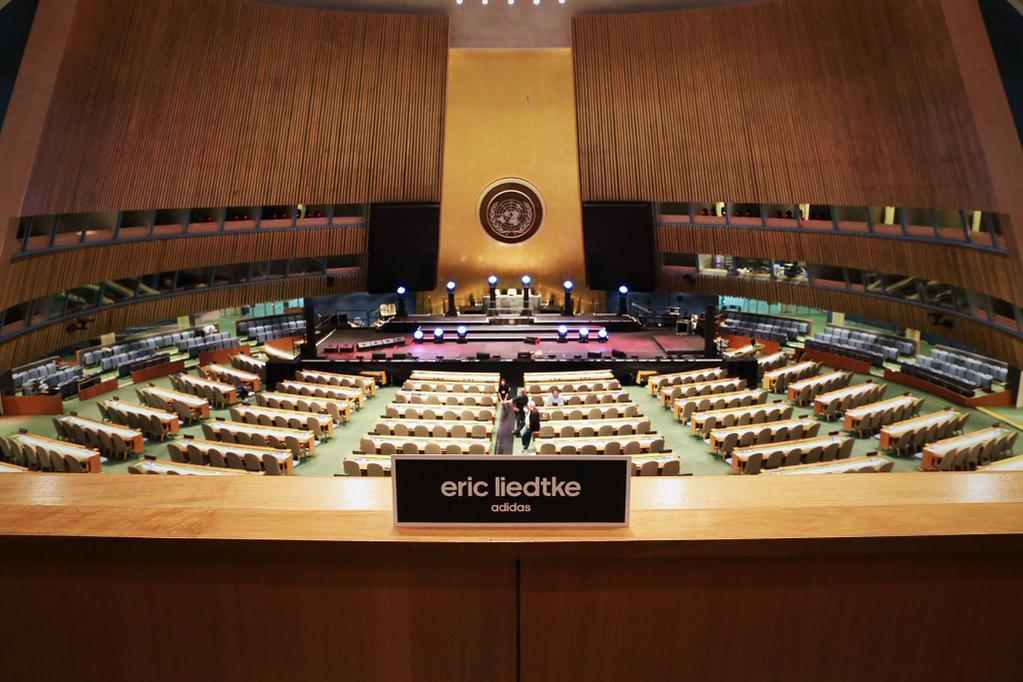 “Speaking at the United Nations, in the General Assembly room, is definitely not something that happens every day. In fact, it’s a once in a lifetime opportunity.” Silvia Raccagni, Senior Manager Sustainability Communication

I forgot to mention that we only had three weeks to prepare the whole thing, which per se was a big challenge! But big challenges in life are never easy. It would not be a challenge otherwise.

Talking points, briefing people, the roll-out for our social channels, the press release. And, also importantly, deciding which shoes to wear at the United Nations! I know, it might seem like a trivial detail, but it matters. So I opted for my Stan Smiths. A classic. 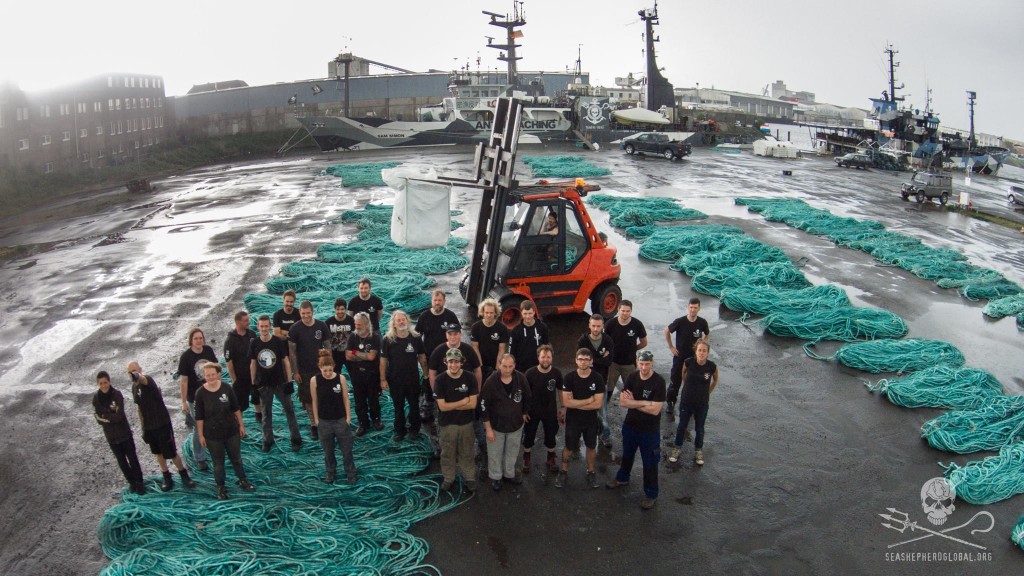 To make our presence even more powerful, we decided not to limit ourselves to using our voice to raise awareness about the state of the oceans, but to showcase the concrete steps that we are taking in this journey with Parley for the Oceans. This is why we decided to showcase a unique prototype product. A shoe in which the upper is made entirely of yarns and filaments reclaimed and recycled from ocean waste and illegal deep-sea gillnets – from the sea to the street in just six days.

But this is not all. In fact, the gillnets used for the shoe (the green parts) came from Parley partner organisation Sea Shepherd, which retrieved the nets after a 110-day expedition tracking an illegal poaching vessel, which culminated off the coast of West Africa. How cool is this???

Captain Sid Chakravarty, who was on the boat that retrieved these gillnets, also attended the event and we all got super emotional when we showcased how his hard work (retrieving nets is hard work!) turned into a beautiful shoe. It was most probably the peak moment for me. 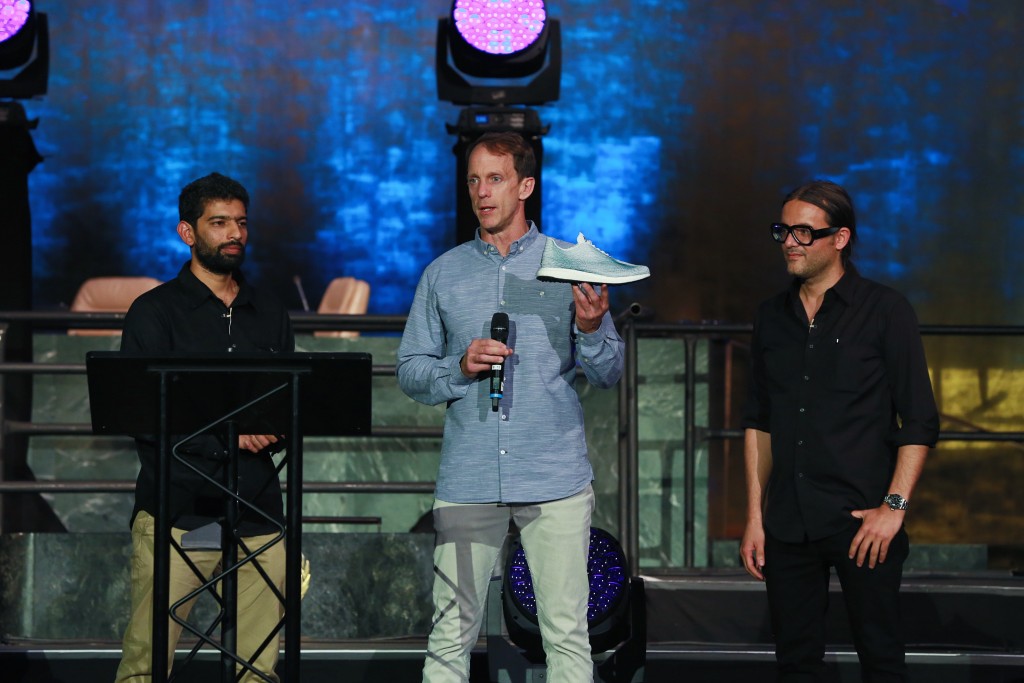 It’s not about the shoe; it’s about the story behind it, and what this product stands for. In a sense, it comes from the oceans, and it stands for the oceans. A bold message. But we like bold statements at adidas.

As Eric said in his speech in the General Assembly hall, “We didn’t partner with Parley to take small incremental steps. We partnered with Parley to make big bold steps that fix big global problems.”

adidas has long been a leader in sustainability, and this partnership allows us to tap into new areas, create innovative materials and products, and make new and completely unexpected experiences.

“I’m incredibly proud to be part of this movement, both as a citizen and as an employee of the adidas Group.” Silvia Raccagni, Senior Manager Sustainability Communication

This project was really unique, and it was great to work with my colleagues around the globe to turn it into a meaningful experience for the brand.

I am incredibly excited about the next steps in this partnership, and it looks like adidas fans are as well! I love the oceans. Bring on tomorrow. 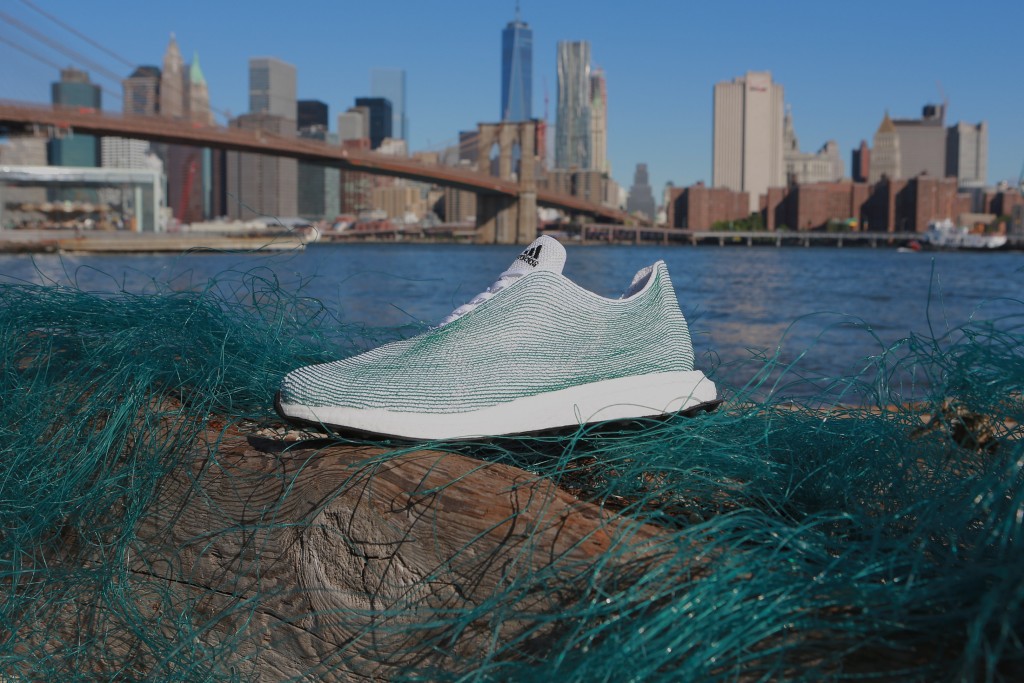 Try again
by Paul Miller 02.07.2015
Congratulations - doing good is good business. If I was on your recruiting team, I'd be leading every candidate conversation with a chat about this.
Reply
by matt 02.07.2015
Very cool...it would be awesome if Adidas jumped on the problem of plastics adrift in the oceans. You'd have a loyal following...http://www.nytimes.com/2014/08/26/opinion/choking-the-oceans-with-plastic.html?_r=0

Keep up the great work!

Reply
by Anne Mäusbacher 03.07.2015
The best ever, in adidas' history (speaking for myself and as very proud adidas employee). I am as well absolutely passionate about reducing plastics in our daily lifes as well, always looking for alternatives ....

if our oceans die - we die (Captain Paul Watson, www.seashepherd.org)

Reply
by Isabelle Coquet 06.07.2015
Congrats! This is an amazing and fantastic project! I am proud to be employee of the adidas group, and that it is able to engage in such a great cause :-)
Reply
by Françoise Ulmann 06.07.2015
Respecting our environment by recycling is the pillar of innovation and progress. adidas group understood it and demonstrates it by this fantastic achievement. I hope deeply we'll continue this way
Reply
by Judith Selby Lang 13.07.2015
Since 1999, from just 1000 yards of one beach in the Point Reyes National Seashore we have collected hundreds of pounds of debris that has washed onto shore. Among the many things we have found, footwear is one of the most poignant congregations. Heels, soles, flip-flops, single shoes gather themselves via tide and current and happenstance from all over the Pacific Rim. Gleaned evidence of the fact of 7 billion humans. Shoes affirm what makes us human. We walk upright so our hands are free to reach into the world. We walk to places to congregate; to take action.

We are excited to learn that Adidas is taking action re: ocean plastic and we are ready to walk the talk with you to find solutions to the problem of plastic pollution.

For more about our project check:


Reply
by steve 01.08.2015
yeah hi I am seeking sponcership support like where I can send vidios any other sponsership info stuff you have for me. Any clothes, sickers what ever I can do. trying to ready for contests and geting all weak like always so please any help. so it would be for skating but I was world record setting distance jump motorbike 318. now 347 foot only one guy uped it. So I can run with big help its just really what I CAN do for you.

Reply
by Troy Lorents 30.12.2016
This is why I love Adidas! The Creative Design department and the whole Adidas Family seems to always impress everyone! Ive always been a fan of Adidas over any other company but i really started to see a change when the ultra boost came not, along with the Yeezys, what surprised me was the shoe sole, and when I put on my first pair of the OG 1.0 all white ultra boost I knew that the shoe game may be changed forever, and sure enough I was right. Not only have the ultra boost not died out one bit, and the ollaborations that are still yet to come I can only imagine, the possibilities are endless. Then came the NMD's and I was like, "Adidas managed to out due themselves once again!" The amount of colorways for the Ultra Boost and the NMD's cant compare to any other shoe in history! I'm not going to lie, before the Ultra Boost came out a lot of peoples go to shoe for "comfort" was the Nike Roshe's. Which i wasnt a fan of and some people were trying to pull the Roshes off with denim and other styles. But where they went wrong is Nike made them able to be customized. Which made the hype not as fun! I hope Adidas never does that and I dont think they will because then they will be to common! But the fact that the Ultra Boost and NMD's are so versatile and comfortable you can dress them up, dress them down, I mean a lot of people throw on their YSL jeans and a Rick Owens shirt with their Ultra Boost as I do and its just such a amazing, clean look! Now look at what they are doing! They are using recycled plastic to make some of the most amazing looking shoes that are once again going to be beyond comfortable and you can say "environmental friendly," sure all the shoes sell out in a matter of minutes and I don't get a lot of the ones I want, but I'm completely okay with this! Adidas keep doing amazing work and finding ways to better the fashion world. If there is ever history going to be made by a clothing company, or actually by any company that can impact the world i truly believe that it is Adidas!

thanks for your kind words. We're proud to have you in our ///-team.